Hotels and offices will be converted into emergency safe spaces under a national action plan drawn up by Tony Blair’s former homelessness expert, to protect rough sleepers from coronavirus. 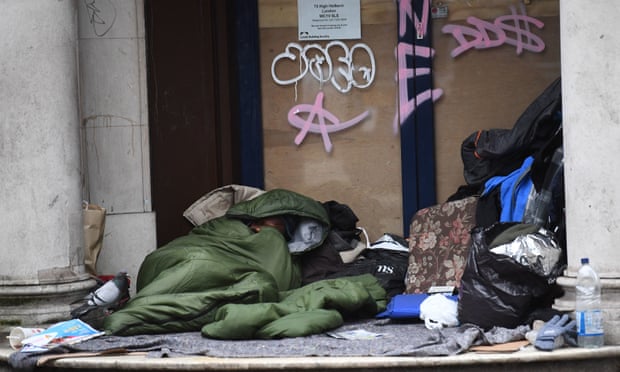 Louise Casey, hired by Boris Johnson last month over the issue of homelessness, was scheduled to start her role after Easter but deepening disquiet that the government was “sleepwalking” on homeless people’s vulnerability to Covid-19 led to her being drafted in to spearhead its response.

The strategy to safeguard the homeless will be announced on Monday and follows the lead of California in allowing vacant hotels to be requisitioned into homes for rough sleepers and those vulnerable to the virus.

In practical terms, protecting the UK’s population of homeless people and rough sleepers by offering safe space to self-isolate means that up to 45,000 “self-contained accommodation spaces” need to be urgently found.

Empty hotels have been pinpointed as a ready-made solution because they have separate cleaning facilities and rooms, and can be leased by the government using funding allocated to tackle the coronavirus pandemic.

Whitehall sources believe the government response to the effect of Covid-19 upon the UK homeless population may have been too slow.

Homeless people are among the most vulnerable to coronavirus, with individuals three times more likely to have a severe respiratory problem, which underlines the need for a rapid response.

Matthew Downie, the director of policy and external affairs for charity Crisis, welcomed Casey’s input. He said: “The response has not been as fast as we needed it to be. The government’s own guidance on protecting yourself is just impossible if you are homeless. We’re now in a race against time because particularly in the night shelter population, where people are sleeping on floors next to each other in rows, that’s too dangerous.”

Already there have been reports that night shelters have had to be shut as a result of suspected cases.

Data from the charity sector indicates there are 40,000 people in hostels, night shelters and shared homeless accommodation, with another 5,000 people on the streets.

Downie said: “All of them need to be tested before and during their time in self-contained accommodation.”

Along with hotels, disused office blocks and student accommodation have also been identified as possible solutions.

Downie said: “If we converted office blocks we’d need to be really careful they’re actually suitable. We can’t have people just thrown into disused buildings. In many ways hotels are perfect.”

Exacerbating the situation is the fact that many of the volunteers at homeless hostels are elderly people, the cohort of the population most at risk, who have been told by the government to self-isolate. Downie said it was vital that outreach teams had sufficient personal and protective equipment.

Last month, Johnson appointed Casey to lead a review into the causes of rough sleeping, providing an extra £236m to help get people off the streets, offering accommodation for up to 6,000 rough sleepers.

The capacity for housing homeless people in hotels certainly exists: London alone is reported to have almost 160,000 hotel rooms, with another 8,000 in 65 new hotels projected to open this year, although that total is likely to fall.

On Wednesday, the ex-footballer Gary Neville announced that two hotels he co-owns with his former Manchester United teammate Ryan Giggs would close to the public and be made available to NHS staff free of charge.

On Friday night the first hotel rooms for homeless people were secured when 300 beds at the Intercontinental Hotels Group were block-booked for the next three months so rough sleepers can self-isolate. IHG owns the Holiday Inn, Holiday Inn Express and Crowne Plaza brands.

The development, which involved the London mayor, Sadiq Khan, and the government, is designed to halt the spread of coronavirus and will mean two London hotels are given over to rough sleepers. Individuals will be moved into the rooms during the weekend. However the rooms have not been offered for free, with a statement explaining they have instead been given at a “substantially discounted rate”.

Any cookies that may not be particularly necessary for the website to function and is used specifically to collect user personal data via analytics, ads, other embedded contents are termed as non-necessary cookies. It is mandatory to procure user consent prior to running these cookies on your website.